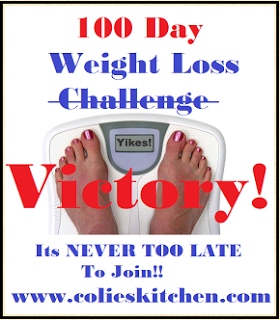 So far this week is going great!  Well, great as far as the challenge is concerned.  Personal stuff is causing me some stress and Grace is having trouble adjusting to the change of seasons and keeping us up all night.  Usually, things like this cause me to shut down and lose focus of my goals.  I am so proud of myself for not giving in to my usual habit of stress eating.  Not to say there won't be any stress eating in the future, but I just want to focus on now.

With the help of My Fitness Pal, I've calculated and set my calorie limit at 1200 per day.  This is less calories than I am used to with past challenges and I've found myself going over each of the first three days (that includes eating the exercise calories that I burned off).  In the past, I would have given up after so many days of not keeping within my limit.  This time, I'm not being so hard on myself.  I know that lowering my caloric intake is going to take some getting used to and as long as I am eating less than I have been in the days/weeks/months leading up to this challenge, than I know that I am on the right track.

On Day 4, I stayed within my calories by 1 calorie!  And only with the help of those exercise calories (58 calories) !

If you've followed along during past challenges, than you know that I hate water.  It's a chore for me to drink just water and have a hard time resisting the urge to drink Diet Pepsi in place of my water each day.  So far this week, I have reached my daily goal of 64 oz. of water.  On Day 1, I gave up soda entirely.  On Day 2, I had such a horrible headache.  I couldn't open my eyes or move without feeling like my head was going to explode!  When nothing else worked, I had 2 very tiny glasses of soda.  While the headache didn't go away completely, I felt so much better!  And I still managed to get in the rest of my water for the day!

I have no illusions that I'll give up diet soda completely.  I enjoy it too much to say goodbye forever!  But I do want to cut back.  As mentioned above, I'm doing pretty good with that.  I'll have to do a photo comparison to show you the difference in the size glass I was drinking from prior to the challenge and what I'm using now!

I wasn't planning on adding exercise to this first week.  I've mentioned in the past the obstacles, or shall we say EXCUSES, that prevent me from exercising.  It's really difficult to exercise with an almost 4-year-old under foot,  we don't have exercise equipment, and we lack a DVD player in the only room large enough to do any sort of work out.

Well, on Day 2 I was scrolling through the OnDemand menu through our cable provider and found myself checking out the Sports & Fitness section.  I saw a 10 minute beginners Walking Basics.  Kind of like Walk Away the Pounds.  I decided to shove my coffee table out of the way and do the 10 minute work out!  I'm embarrassed to say that for this couch potato, 10 minutes kicked my butt!  I was so ready to give up after the first few minutes, especially when my daughter started getting in the way.

On Day 3, I decided to do the same 10 minute workout adding 1 lb. weights to each hand!  So, while walking, marching, kicking and moving my arms I was carrying an extra 2-pounds!  Not much, but it's a start!

Day 4, I almost didn't work out at all.  On Tuesday, I hurt my shoulder and must have pulled a muscle.  It didn't actually hurt until two days later.  But no matter how I moved, it hurt.  Last thing I wanted to do was exercise.  But that decision was really making me feel down in the dumps and I really just felt like giving up on the entire thing.  At 10:30 pm, I ended up doing the 10 minute walking workout again.  This time without the weights, partly because of the pain in my shoulder and partly because I couldn't find them!

This week, I ate a lot of wraps.  I found it was easier for me to figure the calories for my wraps than if I cooked a big meal.  While I love the recipe builder program on My Fitness Pal, sometimes I run out of time get overwhelmed.  That's when I decide to give up.  Eventually, I'll have the time to cook and calculate the calories, but for now I just want to keep it as simple as possible!

I've also been eating a lot of hummus.  Both on my wraps and as a dip with baby carrots!  Mmm!  So good!

Don't get me wrong, while I'm enjoying the healthier options and the smaller portions of my favorite meals, I'm still craving a hamburger.

I'll probably post more about food as soon as I feel a little more in control of this whole weight loss thing!

My attitude was so positive for the first three days.  I didn't mind weighing and measuring my food to determine calories for each item.

Day 4 was not so positive as I mentioned above.  I did not want to weigh and measure my food and was feeling resentful.  I wanted to eat whatever the heck I pleased and while I resisted, I'm still wanting a big, juicy burger!

You are doing great Alison. One day at a time and like you said you can't be so hard on yourself. Life will always get in the way we just have to keep in mind that it can't derail us.

This is all my opinion. Feel free to ignore.

Walking is totally good exercise! Mostly I get my walking in during lunch at work, but I try to get some in when the weather cooperates. Before the weather got too cold in the fall, I would put my 4yo and 1 yo in the stroller and go for a walk. Sometimes my 4 yo rides her bike. I've managed to lose over 50 pounds doing no other exercise than walking.
10 minutes is totally a good start! Keep it up!

The first week is always the hardest but you are making it through & doing well:-) It's a retraining process & if we keep making the healthy choices it will soon become the habit, which will only make it easier. Our days will come! In the meantime, thanks for the Facebook group.... the little notifications I get on my iPhone all day help to remind me that I'm in this when the old habits are trying to coax me back to the dark side:-)

Don't give up on the exercise. I'm sure if you keep moving, just maybe without the weights, your arms will feel better soon. Moving helps you so much to lose faster!!

Walking is awesome!! Starting with 10 minutes is great!! This weight loss journey is very mental!!1 We trick ourselves into, "I dont have time", Im to tired, Tomorrow."
I hope you have a great week!!