I was really wanting to make a pot of Navy Bean Soup with Cabbage using the ham bone that I have in my freezer from Christmas, only I was having trouble finding the recipe that I used when I made it once before.  I thought for sure that I'd find the recipe and had Joe pick up a head of cabbage a couple weeks ago, but I didn't have any luck and decided to just try something different.

While I originally wanted to use dry navy beans, I found a quicker cooking recipe using canned white beans.  So using my last can of cannellini beans, the last of the diced ham (the ham bone is still in the freezer) and 1/2 of the head of cabbage, I threw together this wonderful pot of soup. 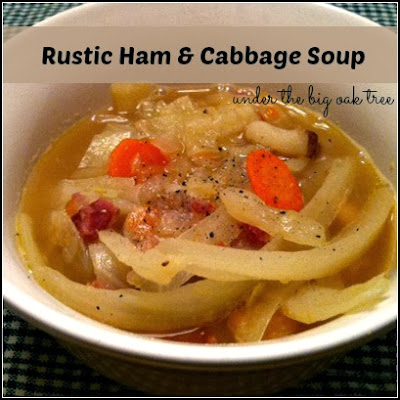 
I've linked this recipe post to the following blog carnivals and linky parties: