Frozen Yogurt Tubes instead of Popsicles


Today's tip comes from a long-time friend of mine.  She also happens to be Joe's niece.  We also share the same first name!  Alison always seems to have some clever little tip or trick when it comes to kids and this one is my all-time favorite!

When the stores in our area sold out at the end of the season, it took many, many days of her begging and screaming asking, to convince her that we didn't have any more freeze pops!  Once she finally forgot about them she was fine.

That is, until January when ordered some Chinese food and she found the tiny plastic packets of soy sauce, duck sauce and hot mustard.  She was convinced they were freeze pops!  Oh my!  That started another week or so of her asking for freeze pops.

Anyway, in talking to Joe's niece about Grace's obsession with freeze pops, she told me that she freezes those tubes of drinkable yogurt.  When her son asks for a freeze pop, she takes one of the tubes of yogurt from the freezer and cuts it in half.  The perfect-sized "freeze pop" for toddlers!  And a bit healthier than those sugary, juice-filled tubes! 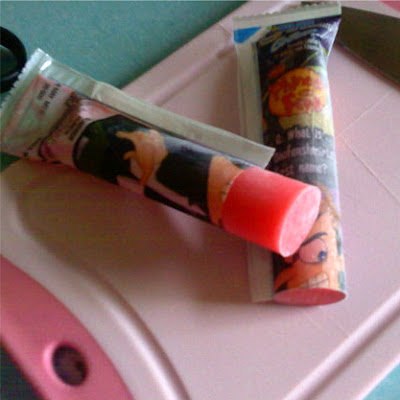 This has come in handy in recent weeks and not only due to the warmer weather.  Grace hasn't been eating much, but I can almost always convince her to eat a few of the yogurt "freeze pops" throughout the day.  So, if nothing else, she's at least eating some yogurt (disguised as freeze pops!).

I've linked this tip to the following blog carnivals and linky parties:

If you want to make them even healthier, you can make your own. Amazon has this awesome ice pop set: http://www.amazon.com/gp/product/B0036B9KHO/ref=oh_details_o00_s00_i00

Great tip! I love having alternatives to Popsicles during the hot seasons. My kids also like freezing grapes, or eating frozen blueberries. We dipped frozen blueberries in yogurt last week and then froze those on a cookie sheet. The kids called them candy :). Ha ha, whatever works!