Since we're a single income family, we rarely go out to eat.  We do make it a point to hit the local breakfast buffet once or twice a year, but once we're home, I always feel regret about spending so much money for breakfast foods.

One of my favorite items from the breakfast buffet is Corn Fritters.  It's probably the only thing from the entire buffet that we don't already make at home.  Knowing it will be a while before I'm tempted to spend the money to visit the all-you-can-eat buffet again, I decided to give them a try.

I had a box of Jiffy Corn Bread mix, so it made sense to check out their website to see if they had a recipe for Corn Fritters.  I figured that was the easiest option since I was a little out of my comfort zone with this one.  As you know, I dislike measuring out baking ingredients so having a boxed mix is always a plus for me!

While their recipe for Corn Fritters didn't taste exactly like the ones from the restaurant, I was still very pleased with them and pleasantly surprised at just how easy they were to make.  Instead of using a deep fryer, I just filled my dutch oven with some oil, about an inch deep, and fried the fritters in small batches until both sides were nice and golden brown. 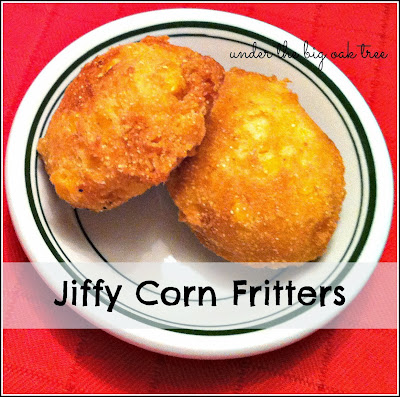 I served the corn fritters with hot bowls of Potato Bacon Corn Chowder in place of biscuits or sandwiches.  And although I didn't try this, I thought they would be really good placed in the bowl with the soup ladled over the fritter!  Joe also suggested that I sprinkle them with sugar while still hot and serve as dessert...I will have to try that the next time!

The boxed mix (along with the added ingredients the recipe calls for) yields about 12 fritters depending on how big or small you make them.  That didn't sound like a whole lot, but after seeing them piled on the plate, I knew we wouldn't be able to eat them all in one night.  I was concerned that they wouldn't be good the next day.  But, just a minute in the microwave covered with a paper plate, they were great!  Not as crispy, but still very delicious!

You deserve a treat every now and then.

Sounds awesome. I haven't used the Jiffy mix for ages. Gotta give this a try. Thanks for sharing.
Blessings!!