You all know that I can enjoy soup any time of the year, but I am so excited that soup season has official begun!

I've been wanting beef barley soup for a couple of weeks now and was pleasantly surprised to find that roasts were on sale at our local market a couple of weeks ago.  We didn't check the add before going into the store, since we hardly ever pick up meat at this market as it's usually a lot more expensive than the supermarket where we usually do our grocery shopping.

We couldn't help but notice the bright orange sale stickers in the meat department as we walked by on our way to show Grace the lobster tank.

Right away, I knew how I was going to use that roast!

First, I made Spicy Chipotle Pot Roast.  This is the only roast recipe that I have ever successfully made, so it's a go-to meal when we find sales that are too good to pass up!  We had sliced beef with mashed potatoes and veggies for 2 nights before I diced the remainder of the meat for other recipes.

After that, I made Beef Pot Pies.  Normally, when I make a pot pie, I make it in a casserole dish.  This time, I made 6 individual mini pot pies that we enjoyed 2 nights in a row!

With the remaining 2 cups of the prepared roast beef, I made Beef Barley Soup.  In the past, I've followed this recipe for Crock Pot Beef Barley Soup-starting with raw London Broil.  But since I was starting out with leftover pot roast, I decided a quicker, stove-top soup would be the way to go.

I was right!  The result was a very meaty, delicious soup that I served for 2 nights' dinner.  I also had enough for lunch for 3 days!

While I'm super-excited to have another great soup recipe to share with you, I can't help but be very pleased with how far we stretched that single cut of meat!  Can't beat all of these meals from one less-than-six-dollars roast!

Of course, my only complaint is that we only picked up one of those roasts while they were on sale.  With each meal, we've been kicking ourselves for not stocking our freezer for the winter! 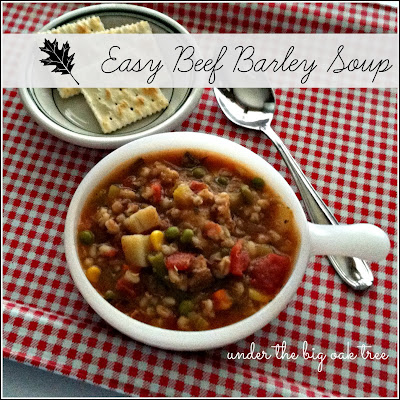 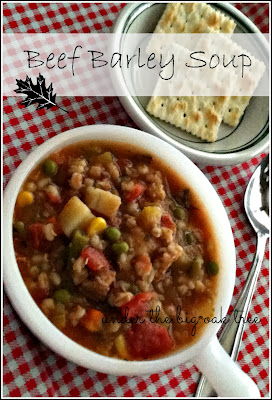 Email ThisBlogThis!Share to TwitterShare to FacebookShare to Pinterest
Labels: soup, soups and stews