The past few weeks, I've been spending time looking for some frugal dinner ideas.  Relying on some of our go-to meals has left me bored and uninspired when it comes to meal time.  During the month of December, I was in a real rut when it came to menu plans resulting in too many fend for yourself nights, frozen chicken nuggets and fries, and more take out than I'd like to admit.

January is more than half way gone and we've managed to skip the take out dinners!  Yay!  But that does mean more cooking for me, which for the most part, I do enjoy.  It's just that I need to find new recipes to prepare.  Cheap recipes.  Easy recipes.  One-pot recipes.  Recipes that will provide dinner for at least 2 nights.

This soup recipe fits the criteria that I'm looking for:
cheap, easy, made in the crock pot, and plenty for 2 nights! 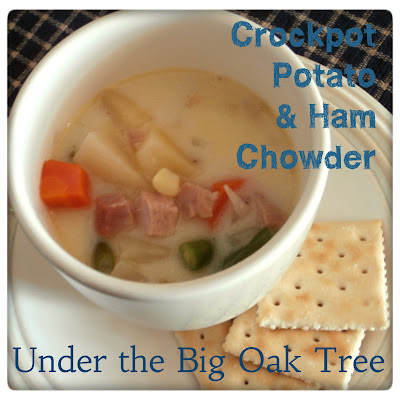 This is a great way to use up some of the leftover ham from the holidays.  When cleaning out the fridge from all the holiday food, I separated our leftover ham into 3 portions.  Although we had a spiral ham from the supermarket, the portions that I froze were from the end and not spiral cut.  Instead they were decent sized chunks that just need be diced up and added to future recipes.

Diced ham steak, sliced Canadian bacon or cooked bacon would be a good options for this too if you don't happen to have any leftover ham in your freezer.