For Grace's birthday, we made too much food.  I always seem to make too much food when we have company.  But I don't mind.  It's better than not having enough.

A lot of the food never made it out of the fridge.  We bought several 5 lb. tubs of barbecue pork and I made 2 double batches of our favorite baked beans.  There was a lot of other food, too, that Grace's aunts and Grandparents made.

When the party was over, I put the stuff that didn't make it out of the fridge, into smaller containers and froze them in meal-size portions for the two of us.

On Sunday, I thought we were going to have company for dinner.  I didn't want to run out to the grocery store, so I thawed some barbecue pork and some of the baked beans.  Plans fell through and we didn't end up having guests.

So, this week, we'll be eating a lot of barbecue pork sandwiches and baked beans.  No big deal.  It's better than wasting it.  And as a bonus, I don't have to worry too much about what's for dinner. 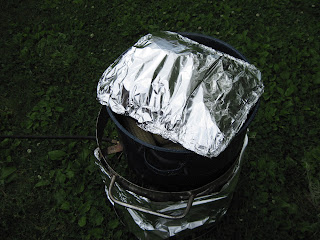 On Sunday, Joe said he'd heat up dinner.  We were having corn on the cob with the pork sandwiches and beans.  He dug out his Turkey Fryer and my big speckled pot for the corn.  He filled the pot with corn and water and put it on top of the turkey fryer.  He then lined a foil pan with foil to make compartments to keep the pork and beans separate.  Then covered the foil pan and placed it on top of the corn pot.  The edges of the pan rested on top of the rim of the pot, so it sat inside the pot, but above the water.  The heat of the boiling  water/corn cooking heated the food in the foil pan!  Perfect! 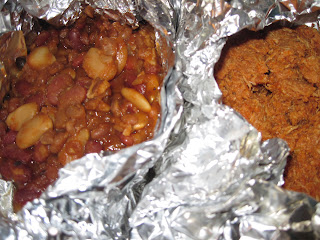 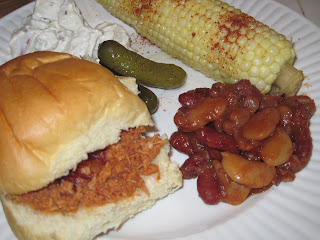 Cleanup was super easy!  Only one pot to wash!

Email ThisBlogThis!Share to TwitterShare to FacebookShare to Pinterest
Labels: Kitchen Tip Tuesday, Works for me Wednesday

See, that's something I love about men: They often have these "different" ideas about how to do cooking and housekeeping that turn out to be very practical!