A friend of mine gave me a smoothie recipe a couple of weeks ago.  The recipe called for coconut milk, so in one of my daily texts to Joe, I asked him to pick up a carton on his way home.  It was good timing, too, since it was on sale for $1.00 off that week.

I have a bad track record when it comes to milk.  It doesn't matter if it's soy milk, coconut milk or my usual skim milk, I have a habit of forgetting about it until it has passed the expiration date.  Resulting in pouring the spoiled milk down the drain.  So, after seeing the high price of the coconut milk, Joe told me if I didn't use every last drop, he would not buy it again!

When I realized we had a half gallon of the stuff and the recipe only called for 1/4 cup, I was sure there was no way I'd finish it all before it expired.  I tried it in my cereal and was not a fan at all.

I then decided to make some pudding using a box of sugar free Jell-o pudding mix and the coconut milk.  I measured out the coconut milk, added it to the pudding, mixed it well and put in the fridge to set.

I checked the box thinking maybe I used too much milk.  Nope.  I measured correctly.  I just failed to see the note at the bottom stating that the pudding would not set when using soy milk.  Apparently, it won't set when using coconut milk either.

After chilling it overnight in hopes that it would eventually thicken (it didn't), I remembered that I've been wanting to try to make my own pudding pops.  Those oh-so-yummy frozen treats I enjoyed when I was a kid.  No better time then right then!  I pulled a chair up to the cabinet that's above my refrigerator and dug out my popsicle mold.  Cleaned it up, filled it with pudding and popped it into the freezer.  And waited. 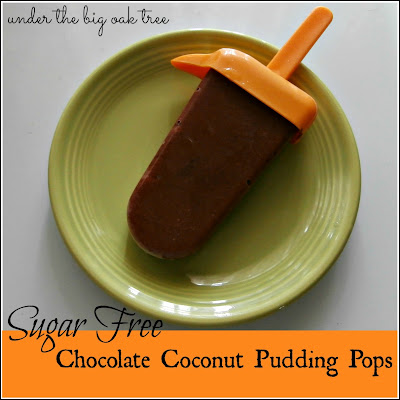 I'll be making these again once the weather warms up a bit!  I'll have fun trying a bunch of different flavor combinations, too!


I am linking up and sharing this post with the following blog carnivals and linky parties: