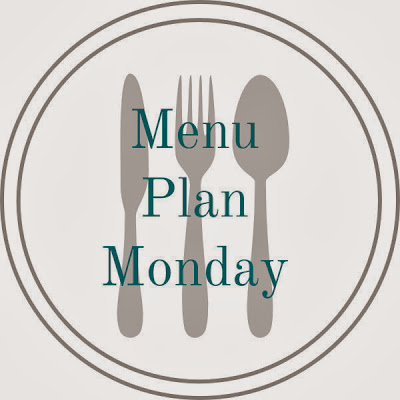 Hello, dear friends!  Happy New Year!  I hope you all had a wonderful Christmas and are working on your resolutions for 2014! I know I am!

Now that the crazy holiday spending has come to end, it's time to try to save some money (part of my resolutions) and "shop" my freezer and pantry for the majority of meals for the next month.  Pantry cooking may seem a little boring, but it doesn't have to be.  While I'll be using some of our usual tried and true recipes, I'll also be trying out some new frugal recipes I've found online.

In an effort to keep my menu planning on track, I thought I'd blog a list of potential meals for the month and then hopefully recap each week.

Let's start off with the New Year's Eve menu.  We're having some friends over for dinner but still, keeping our dinner menu pretty low-key.  I have a pork shoulder cooking in the crock pot as I type.  We'll shred that up for some sandwiches and serve with some homemade Baked Beans and Potato Salad.  Mmmm!  Dessert will be some fresh baked Gooey Butter Cookies and some S'mores.  Easy, frugal and so not boring!

With an 8 lb pork shoulder and a small guest list, you can bet I'll be serving leftovers for New Year's Day!  I'll be spending most of the day snuggled on the couch watching the Mummer's Parade, so I really don't want to have to worry about preparing another meal.

Here's what'll be cooking for the rest of the month:

Easy Goulash.  I'll be subbing ground beef for the vegetarian protein crumbles.  Not only because this is a "cook from the pantry" month and we don't have the vegetarian crumbles on hand, but also because I really don't think Joe would be very fond of the crumbles.  He tolerates me cutting back on the meat I serve by using smaller amounts or by preparing meatless meals in general.  I just don't think he'd like the meat substitute very much.  Either way, I personally think this dish will be a hit.

15 Bean Soup.  I made a big pot of delicious bean soup using leftover Christmas ham.  It was delicious and as always, there are plenty of leftovers.  Probably enough for two more dinners!  Probably my favorite thing about soup is how far it stretches...especially when trying to stick to a budget!

Shredded Buffalo Chicken Sandwiches.  Last month, I made some Crock Pot Shredded Buffalo Chicken and froze the leftovers in smaller portions.  We have one pack left in the freezer and I will put it to use this month.  I'll most likely serve this with some Roasted Potatoes since I have about 7 lbs. of potatoes we picked up a few weeks ago when they were on sale.  We'll have to pick up buns for the sandwiches since I didn't plan enough ahead to have some buns in the freezer.

Crock Pot Lentil Vegetable Soup.  You can't get much more frugal than lentil soup and homemade broth.  I really can't wait to try this recipe!

Turkey Dinner.  I know that a lot of people are sick of turkey after Thanksgiving, but truthfully, I didn't feel like I got enough turkey this year!  Luckily, we planned ahead and picked up 2 super-cheap turkeys when they were on sale just before Thanksgiving.  We'll soak the smaller turkey in a soy sauce brine just like I did for a whole chicken a couple of months ago.  I serve a nice Sunday dinner with mashed potatoes and stuffing and then use the leftovers for other great meals!

Sloppy Joes.  Super easy and close enough to junk food to hopefully curb the fast food cravings since I'm all about saving money this month!  Buns and bell peppers will need to be purchases for this dinner.  Oven fries or a quick cole slaw will be served on the side.

Bacon, Bean and Butternut Squash Soup.  I have the beans and the squash, so hopefully someone will have a really great sale on bacon this month.  If not, I may just have to do without.  Please let there be a sale on bacon!

Sweet Potato Soup.  We got a steal of a deal on a bag of sweet potatoes several weeks back.  I really need to get around to using them.  This soup will be a good start.  I have most, if not all, of the ingredients on hand.

Turkey Pot Pies.  Over the summer, I picked up some small oven safe bowls that are perfect for individual pot pies.  While the pot pies are a bit on the small side for Joe, requiring him to have a second helping, they are the perfect for portion control for myself.  Pot Pies are comfort food for me and I could so easily just eat the entire pan instead of putting away the leftovers.  These individual pot pies help me to think twice before reaching for seconds, especially when served with a salad on the side!

Navy Bean Soup.  I haven't decided exactly how I am going to prepare this yet.  I like my Bean Soup with cabbage added but can't seem to find the recipe I followed the last time I made it that way.  So, I'll either look for another or just totally wing it.  Of course, I'll be adding leftover Christmas ham.

Open Face Hot Turkey Sandwiches.  Even have a meal you hated as a kid that you love now that you're all grown up?  This is one of those meals for me.  I think my issue was the soggy bread.  My guess is that my mom prepared my plate before calling me to the table for dinner, resulting in soggy bread.  Now as an adult, I make my own plate when I'm ready to sit down to eat.

Venison Tenderloin, Mashed Sweet Potatoes, Steamed Veggies.  Hoping for a mild day, so Joe can prepare the tenderloin on the grill.

Venison Chili.  Any tenderloin left over will be diced and combined with some ground venison for a hearty chili.  Beans and vegetables will most likely be needed by the time I get around to serving this chili.

Spaghetti with Crock Pot Meat Sauce.  It feels like forever since we've had spaghetti so this will be a nice change from all the soups and beans we'll be eating this month.

Spaghetti Bread.  Perfect way to serve up those leftovers!

Low-Calorie Crock Pot Vegetable Soup.  This is a perfect low-calorie and budget friendly soup.  Great on it's own or served with grilled cheese sandwiches or with a baked potato or salad on the side!

If by the end of the month, we haven't used all of the sweet potatoes, I may just serve up a pot of Black Bean and Sweet Potato Chili.

So, there's an idea of what I'll be bringing to the table this month.  Meals are subject to change though, due to timing or mood.  Although, I will try to stick to this guideline as much as possible as I am determined to save money and use as much from our pantry, fridge and freezer as possible.  I also want to get better at avoiding food waste.  Too often I am guilty of forgetting leftovers in the bottom of the fridge until it's too late. I will be challenging myself to plan on using leftovers later in the week or freeze immediately to avoid it getting lost in the bottom of the fridge only to be forgotten and ultimately thrown away.

What are you doing to cut back on your grocery budget this year?  Please share in the comment section!