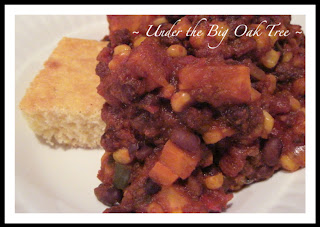 I've been looking for a really good vegetable chili for a while.  I've found a few over the years, but was never brave enough to serve a MEATLESS chili to my husband for dinner.  For the past several months, we've been trying to add more meatless meals to our menu plans.  Less meat is healthier and cheaper.

Since Joe has been open to the idea of meatless meals, I knew right away when I found this recipe that I wanted to try it!  But true to form, I made a few changes here and there.

Ingredients:
Directions:
Remember I said that I was leary of serving this to my husband?  I originally planned on just having this on the stove, ready to put on the table when he walked in from work.  Just before he left work, he called asking me what I had planned for dinner.  I told him and boy, could I hear the skepticism in his voice!  I knew he thought I was crazy!  Chili without meat??  No way!

He even tried to stall dinner.  He was checking the mail, playing with the dog, taking his boots off....anything to avoid sitting down to dinner.

I placed a chunk of cornbread in the bottom of a bowl, then scooped a large portion of chili right on top of the cornbread.  Joe added sour cream to his, I enjoyed mine plain.

I really liked the chili.  A lot.  I didn't miss the meat at all.  It was a nice and hearty meal.  And for as leery Joe was about the meal, he also really enjoyed it.  This recipe made enough for dinner for the two of us for two nights and I still have a small container in the freezer that I plan on serving on wraps as a black bean and sweet potato burrito!

This recipe is a keeper!  In fact, I plan on adding it to my menu plan agan soon.  This week is starting off to be pretty cool and brisk.  If the cool weather keeps up, I'll be making up a pot of this for a nice and cozy meal! 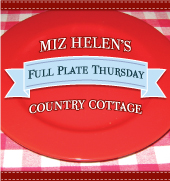 Email ThisBlogThis!Share to TwitterShare to FacebookShare to Pinterest
Labels: recipes

Wow, this looks amazing! I love black beans and sweet potato, I bet they are awesome together in this chili :)

this sounds delicious and so healthy perfect for winter weather

This looks delicious! I have a burrito recipe that uses black beans and sweet potatoes, so I know it's a yummy combo!

Wow, this sounds really good. I love sweet potatoes, I can imagine it made this nice and thick with a bit of sweetness.

I think I found my next chili! This looks great! I love both beans and sweet potatoes! AND I love chili!

My husband is still getting used to meatless meals. I tend to make them more on nights when he is working and it is just me, the kids and my brother to cook for.

I can imagine that the flavors of black beans and sweet potato go really well together. I need to give this a try!

I love sweet potatoes. What a great idea to put them into chili for a great meatless meal. By the way, I'm holding a CSN giveaway on my blog and you're welcome to come by and enter. http://sweet-as-sugar-cookies.blogspot.com/2010/11/45-csn-giveaway.html

I am usually leery of vegetable chili also - but this sounds thick and hearty enough for even me! It sounds delicious - and over cornbread is the only way to eat chili! Thanks for sharing this with us at the Hearth and Soul Hop!

Sounds and looks delicious. I would be a little scared to serve something "meatless" to my husband too. I will have to try it out on the kids first:) Thanks for sharing!
www.8aplenty.blogspot.com

What a good food combo idea - that sounds great! I'm so glad you linked up at Vegetarian Fridays this week! I hope you will cook something vegetarian again to share another time. All the best!

yum! i am a big fan of meatless chili...although my hubs would be skeptical too...i like how you added the cornbread..that might be enough to get my hubs to try it! love the tip on the frozen beans..i hadn't thought of that. thank you for linking all this goodness up to the tuesday night supper club!

Sounds like a yummy chili--I love sweet potatoes (and your ideas for leftovers sound delightful)! I'm glad you linked this to Food on Fridays!

Mouthwatering! I will try this in my crock pot. You have a great blog!

Wow, that sounds so good!! I would never have thought of Mexican-flavored sweet potatoes until I had a sweet potato burrito in a restaurant. It was so delicious that now I make them often.

Here are 7 ways to eat less meat that you might find helpful.

I love this idea and will try it soon. I might add in black beans because I like them so much. I would also add a can of Hot or Mexican Rotel because we like the spiciness. One thing you might try as a way to thicken (and not use the flour) the chili is to use an immersion blender. I like to use one with my chili because it smoothes it out and thickens it.
I make a turkey/vegetable chili that is served over baked sweet potatoes. We love it. Thanks for linking to Crock Pot Wednesday. I hope to see you there again this week.

Thanks for posting this on What's Cooking? Wednesday. Looks like a great cool-weather dinner!

This is a perfect day for your wonderful Black Bean & Sweet Potato Chili. I am having a bowl right now here at Full Plate Thursday. Thank you so much for coming today and please come back!

We had some black bean and sweet potato burritos awhile back that were scrumptious. The Chef thought I was weird for putting the two things together, but now I can show him your post as evidence that I'm not crazy! Thanks!