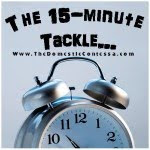 I'm really happy that The Domestic Contessa is hosting the 15-minute Tackle on Tuesdays.  I'm hoping that by participating each week, it will make me accountable for getting my weekly task completed.

I wouldn't want to admit failure to all of you!

taking a shower....you get the idea!

Gracie sleeps great at night.  As a result of her sleeping 12 hours straight every night, she rarely naps longer than 5 to 10 minutes, if at all.

I see it as a trade-off for a great night's sleep!

on a day to day basis.

Gracie will nap occasionally for more than 5-10 minutes, but only if I'm holding her.  If I hold her (like today), she'll take a 2 or 3 hour nap.

I use that time to catch up on some of my shows that Comcast offers On Demand (I wish they offered all the shows I like On Demand).

But, holding her doesn't allow me to get anything accomplished around the house.  Defeats the purpose of naptime, as far as I'm concerned.

As much as I hate the TV being her babysitter, I  NEED to get stuff done.

Yo Gabba Gabba, The Wiggles, and Jack's Big Music Show all seem to be the best at keeping her occupied and happy while I get a few things done.

She loves music and all three of these shows provide lots of singing and dancing as well as some very educational lessons!

Last week, my 15-minute Tackle was all about decluttering.  I needed to get some baby stuff packed away and get the Christmas decorations down and packed away for Joe to put up in the attic.

I did great on both tackles!

I have a huge box of baby clothes that Grace has outgrown, as well as her

co-sleeper and infant carseat in the garage.  I wasn't able to get the swing broken down, so that will have to wait for hubby to do.

I also have 5 bins of Christmas stuff all ready to go and live in the attic until it's time to bring them down to decorate next year. 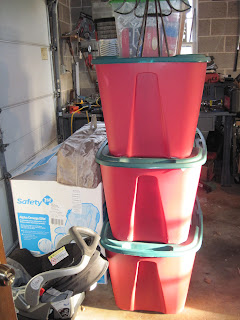 The carseat box is holding all of the outgrown baby clothes, her co-sleeper is stacked on top and sitting in front is her infant carseat.

The three red bins are all Christmas decorations and there is a clear bin on top that is holding some Christmas lights that Joe bought on clearance.

The 5th bin is still in the basement.

Joe said he'd carry it up since it's bigger than me!

It's all still in the garage waiting to be put up in the attic.

Joe worked most of the weekend and didn't get the chance to take it up yet.

But it's really not bothering me being in the garage.

I was so focused on getting this done, I was able to spare more than 15 minutes each day on each one.  Every chance that I had where Grace was playing quietly or enjoying one of her shows, I forced myself off of the sofa to get it all away.

I managed to get done early and work on a tackle that I had planned for this week.  Kitchen cabinets.  I reorganized 4 of the cabinets in my kitchen!

I'm very pleased with myself!

This week's tackle is going to be the guest room.  The guest room is where most of our clutter lives since we don't have guests too often.

and the guest room isn't fit for sleeping at all!

Here's a small peek at what I have to deal with this week: 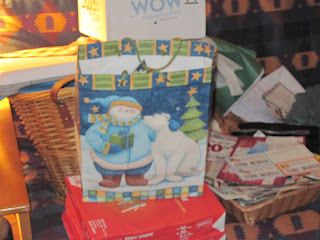 I really need to find a system that works for us, but until then, I just want this room to look clean!

I'll also be working on thank you cards from Christmas.  I had something in the works, but that plan fell through, so I have to come up with something else and get them out in the mail soon!

That's great that you got your tackle done last week. Your daughter sounds like my kids. I try and read or relax if she falls asleep in my arms but I have had to put her in her crib some so I can get stuff done! Good luck this week, my tackle is the kitchen. You can find it here: http://www.couponclippinmommy.com/2010/01/15-minute-tackle-kitchen.html

The paper clutter! Uggh! You should see the stack of coupons I need to cut and organize! By this time, some are probably out of date! Good luck on this weeks project, I'll be checking back to see how you are doing. If you have onDemand Comcast, check out Ebee for your daughter. She will love it and you might get a kick out of it too. It was the only TV show my daughter would watch until she turned two! It is in the kids section under babyboost I believe.

Paper is such a problem everywhere! I feel your pain. I've got to tell you, if it were me, I'd probably throw away everything that wasn't absolutely necessary! (Ok, not the bills.) Then just start over! But that's just me... I'll look forward to seeing how you do 15 minutes at a time! :)

Wow, Alison! Great job! It's great to hear about how successful your 15-Minute Tackle was for last week! I love how you point out how great blogging can be at holding you accountable - I totally agree... :)

You've gotten a lot done over the past week - I'm looking forward to hearing all you accomplish next week!