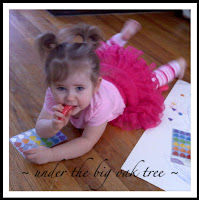 Grace is such a gaudy girly girl sometimes.  She's just now starting to get interested in playing dress up.  Really, I'm not sure that she realizes that she's playing dress up, or if that's just the style of clothing she would choose to wear out in public if given the chance!

Last summer, we couldn't get her to wear a sun hat at all.  So, we spent most of our time in the shade when outside.  We had trouble with winter hats too for the beginning of the winter.  The only time we could get her to keep a hat on was if there was snow on the ground.  Somehow, she seemed to understand that the snow was cold and she needed a hat and gloves.  She still pulled them off after a little bit, but they stayed on longer than the sun hats during the summer.  Longer than if there was no snow on the ground, too!

Joe and I don't wear hats very often.  I wear a winter hat if it's really cold and Joe will wear a cap on a rainy or snowy day.  Since this winter was both very cold and very snowy, Grace saw us wearing hats more often than usual.  When Joe would come home from work, Grace would take his hat and run off with it and play with it.  Eventually, this led to her putting it on....backwards.
﻿﻿﻿ ﻿﻿ I found some cute Easter bonnets at the Dollar Spot in Target.  I threw one in the cart just for the heck of it.  I had a feeling that it might get crushed before Grace actually got to wear it, but I was happy to see her trying it on and looking at herself in the mirror.  (Sorry no pictures of her modeling the bonnet yet.)  Over the weekend, I picked up another one in a lavendar.  This one will match her Easter dress.

Since we weren't planning on going anywhere this week, I dressed Grace in her St. Patrick's Day t-shirts over the weekend.  I was hoping to take some better pictures of her yesterday wearing her St. Patty's green, but since we're sick, this photo taken over the weekend with my phone will have to do: 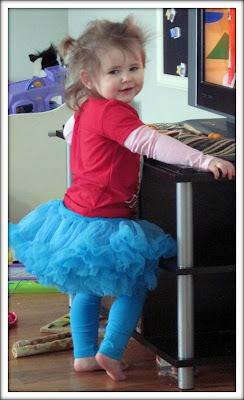 Grace loves her tutus too!  If she sees them when we're getting dressed, then that's the end of whatever I planned on her wearing that day.  Usually, it's not a big deal.  I'll let her pick which one she wants to wear and let her run and twirl around the house!
On this particular day, she chose to wear her turquoise pettiskirt with her Olivia t-shirt.  But, she wouldn't let me brush her hair!
Just last week, she wanted to wear a tutu as soon as she woke up.  She didn't want to take the time to get changed though, so w put it on right over her pjs!

Sometimes, I plan for her to wear a tutu if it matches the rest of her outfit. Here she is wearing her hot pink tutu for a day of shopping with mommy and Aunt Barb ( sorry, it's another bad, camera phone picture with my messy kitchen cropped out of it).


It's the same tutu that she wore for Valentine's Day, but since her St. Patty's Day t-shirt had pink in it, I thought it matched pretty good, especially with the sweatshirt.

This weekend, we'll be going to our niece's birthday party!  Bella is turning 2 already...I can't believe it!  Bella's mommy is throwing her a Princess Dress-Up party!  I can't wait!!!  I'm hoping Grace will participate.  Sometimes she just does her own thing when we visit with all of her cousins.  But I'm hoping she'll see all of those pretty, princess dressed and just jump right in and play!

I'm thinking now, it's time to start a dress-up trunk for Grace.  Tutus, beads, boas, etc.  I'm really excited!  So far, I've picked up another tutu for her and Aunt Barb picked up more silly headbands for her.

If you have any suggestions, leave them in the comments, I'd really appreciate it!
⌘ Posted by Alison on Friday, March 18, 2011

Absolutely, adorable, she is wonderful!
Sweet photo's, thanks for sharing.
~JO
LazyonLoblolly