Spanish Chicken is a recipe that Mom made often when we were kids.  It's a family favorite and we always knew when we saw that big, glass bottle of Heinz Ketchup that we'd soon be eating Spanish Chicken for dinner!

Although, I've made Spanish Chicken  many times over the past several years, I'm just getting around to sharing it with you now.  You see, this dish isn't really a recipe, it's more of a throw-it-together sort of meal.

When I threw it together on Saturday, I wrote down the ingredients and measurements as I went along.  I'm a little fuzzy on the cooking times, so you'll have to use your judgement on that. 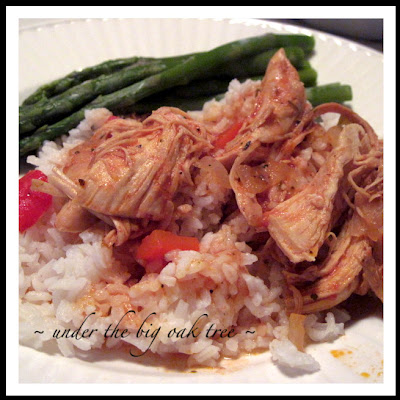 Email ThisBlogThis!Share to TwitterShare to FacebookShare to Pinterest
Labels: recipes

Hi Allison,
It is good to see you, I am glad you could make it over today. Your Spanish Chicken looks really delicious. I can see how it could become a family favorite. Thank you so much for sharing at Full Plate Thursday and please come back!