I've been in the mood for Chicken Corn Chowder for a few months now, but I've been waiting for the perfect weather for it. Although, I love soups and chowders all year long, there's nothing like a hot bowl of chowder on a damp and stormy day!  Like today.
This morning started out humid and sticky, then sometime after lunch, the storm clouds rolled in.  After a good, soaking rain (not that we really need it) the humidity left and now it's brisk and chilly!  A perfect fall evening to go with our super-easy and super-yummy dinner!

Now, normally, I would have followed some sort of recipe for Chicken Corn Chowder.  But today, I decided to just throw a bunch of stuff into my dutch oven.  You really can't go wrong with corn chowder. 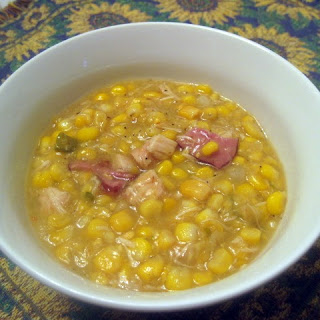 We'll be finishing up the leftovers this weekend!