Our family loves Coleslaw.  My mom used to be the coleslaw maker of the family, but one Thanksgiving, she happily handed over the coleslaw making duty over to my dad.  And although the recipe he uses was originally my Mom's, we call it Dad's Coleslaw.

Now, I'm not sharing Dad's recipe here today.  Mainly because he doesn't follow an exact recipe.  He eyeballs the measurements (something I'm not always good at) and I just can't seem to get it right when I attempt to make it myself.

After buying a couple of bags of coleslaw mix when it was on sale last week, I decided that one of the bags would be actually used to make coleslaw while the other would be used in Crock Pot Minestrone Soup.  Checking out my pin boards on Pinterest, I found this recipe that I pinned a while ago that I've been wanting to try.  Seemed like the perfect time since I had the already shredded cabbage in the veggie bin. 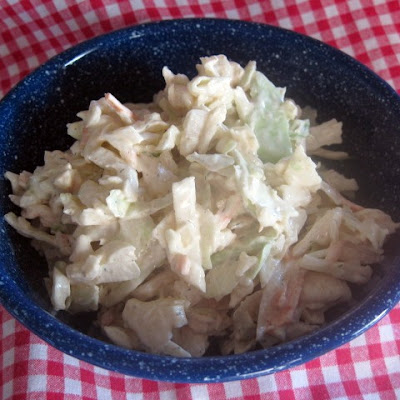