Earlier this week, I shared a recipe for Mashed Potatoes and Cauliflower.  It's our new favorite recipe for mashed potatoes.  The last time I made them, I made a lot!  I think I may have tripled the recipe, so there were a lot of leftovers.  I decided to look for different ways to serve the leftovers.

Like any foodie, I have a long list of new recipes I want to try.  I send myself emails containing recipes of interest, I've flooded my favorites file on my AOL toolbar, and I have post-its sticking out of my collection of cookbooks.  A few of the bookmarked recipes have been tried and made again, but most of them are un-tried and forgotten about until I get a rare moment to sit and clean out all of those files or read a cookbook.

In recent months, I've discovered Pinterest.  I love Pinterest.  But, as most of you know, it's highly addictive.  I've had to limit my pinning time to just a couple of hours a week, otherwise I could easily lose an entire day browsing through all the beautiful photos of food, crafts, home improvement ideas, etc.

After drooling over this Potato Tart photo on Pinterest, I knew I just had to make it right away.  I didn't want this recipe to be one of the long-forgotten "must try" dishes that I tell myself I will try someday.  The fact that this recipe called for leftover mashed potatoes and I had a big bowl of just that in the fridge really helped in my decision to not tuck this recipe away to be forgotten.

I was a bit nervous, though.  This recipe called for pie crust.  That's uncharted territory for me.  The only thing I know of pie crusts are those pre-made graham cracker crusts sold in the pudding aisle of the super-market.  And, though, I'm a pie crust newby, I knew that particular crust wasn't what I needed for this recipe.

I quickly sent out an email to my long-time friend, Lisa.  I told her I needed help finding a pie crust recipe that would work for this savory dish.  I also told her that I'd love to use Bisquick if at all possible, since I have a big ol' jar of it on my counter.  I also told her that I don't have a rolling pin, so I needed something that I could make just using my hands.  As always, Lisa was a great help.  She pointed me to a simple pie crust recipe that turned out to be perfect for this meal.  (Thanks, Lisa!)

As for the pie itself, I halved the recipe that I found on Pinterest for two reasons:
In halving the recipe, I adjusted the ingredient amounts a bit according to what I had in the fridge and what I thought we would like best.  (i.e. less cheese since I'm not hugely fond of cheese, no green onions since I didn't have them.)

Oh, and I keep calling it a pie.  The original recipe calls it a tart.  The original recipe also looks beautiful and worthy of the fancier name.  Plus, I used a pie pan since like the rolling pin, I don't own a tart pan (can you tell I don't bake?).  So, I called this meal Loaded Mashed Potato Pie. 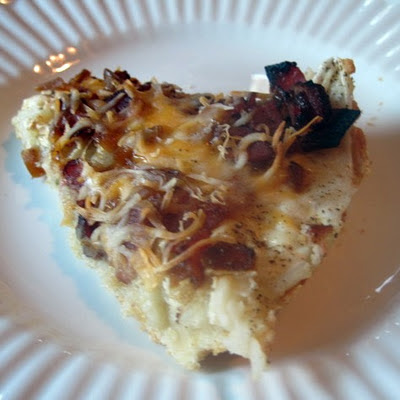 Hi Alison! This looks awesome. Thanks so much for dropping by today and sharing your recipe on my blog. Have a great weekend!

What a great use for leftover mashed potatoes. Kind of like a giant twice baked potato! I always have some left and I'm sure that will definitely be the case after Turkey Day.

(I don't think it matters whether you call it a pie or a tart when it tastes so good! LOL)

Newly following from Foodie Friday. Thanks for the yummy recipe! :~)