Grace and I had a wonderful day on Wednesday, we had a play date scheduled at our house.  Grace loves other kids, but we don't have any within walking distance to our house.  Since we are a one-vehicle family, play dates are rare.  Especially, since we are an hour away from our friends in the city.

Recently, thanks to FaceBook,  I reconnected with a high school friend that has an almost-3-year old daughter.  We've gotten together twice for play dates.

Yesterday, they drove up from the city and Grace and I loved having the company!

On Tuesday, I was trying to decide what to serve for lunch.  Lunch for the girls was an easy choice.  But I couldn't decide what I wanted to prepare for us moms!

I remembered that I had some oven-barbecued chicken breast in the fridge, so I picked it from the bones and diced it up.  Then I sat down at the computer to search for a recipe.  I knew I didn't want the traditional mayonnaise-based chicken salad, since we just had Crunchy Tuna Salad the week before.

I went to allrecipes.com and searched for Barbecue Chicken Salad.  There were a few recipe options, but this is the one I chose to prepare.  I adapted this recipe bit, by using less celery and by using my homemade barbecue sauce as the base. I also  used a white onion istead of a red one.  Mmmm! 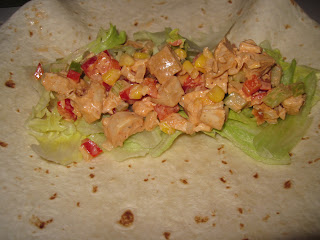 We ate the chicken salad on large flour tortillas with lettuce.

I always worry about making a new recipe for company without trying it first.  So, after mixing it  up on Tuesday, I decided to have some in a wrap for dinner that night.  Loved it!  Merry and I ate the wraps for lunch and after they left, I was too tired to prepare dinner, so Joe and I ate the leftover chicken salad for dinner later that night!

I really loved how easy and tasty this salad turned out!  It's a great summer meal since it's a cold salad that can be made a day or two in advance.  For me, it's a great way to use up celery in the summer time, since I don't make as many soups or stews during the hot, summer months!  I also love that it can be made with leftover chicken, making it not only easy, but frugal as well!

Mary @ Giving Up On Perfect said...

That looks really good! Thank you for sharing!

I love how you mixed this up (literally) from the traditional chicken salad. This is a fun idea that wouldn't have occurred to me, but it sounds terrific.