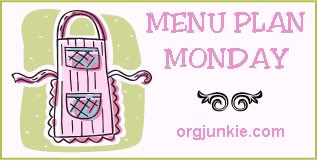 As previously posted, I'm still having some computer issues.  Hopefully, I'll be able to get back to posting more regularly soon.

But for now, I'm back for another Menu Plan Monday!  There were a few problems with last week's menu plan, but it all worked out in the end.

First problem was the Shepherd's Pie I made for Monday.  It was awful!  This was my second time making it and the second time that it didn't turn out!  I really can't see what the problem was since we love hamburger gravy and we love mashed potatoes!  I think I should stick with just a scoop of mashed potatoes on the plate with the hamburger gravy poured over it.  We'll skip the casserole dish and oven next time!  We ate it,  we just didn't enjoy it!  :)  The leftovers were not saved!

Next problem was the chicken I planned for dinner smelled a bit funny when I open it.  And since I'm really paranoid about food poisoning, we just skipped it.  I checked the freezer to see if I had any pre-cooked, diced chicken to use in a casserole or something.  No luck.  I scanned the pantry for something.  Anything.  And came up with a plan that would use up a can of salmon from Trader Joes.  I mixed up a batch of salmon patties and baked them in the oven and served with the mashed potatoes and veggies that I planned to serve with the chicken.

Yesterday was an "undecided" day on the menu plan.  Usually we run errands on the weekends and grab dinner while we're out.  Yesterday we spent more money than we would have liked, so we opted for dinner at home.  Only problem was that I didn't have anything thawed for dinner.  I had some meat sauce in the freezer, so I took a 2 cup portion of that and added it a pot with a jar of store bought sauce.  I boiled up some pasta and served some bread and butter on the side.  Grace really enjoyed dinner and ate every bit of food that I put on her tray!

The cowboy stew was a success but then, it always is.  We really do enjoy it and love all the leftovers!  Another success was the tuna noodle casserole that I made.  I knew that the cowboy stew would be great since I've made it before and we really enjoyed it!  I was leery about the tuna noodle casserole.  I really didn't like the idea of hot, canned tuna.  Surprisingly, we really enjoyed it and it will be part of another menu plan soon!  I'll also be sharing the recipe here soon.

For the next couple of weeks, I'm going to be trying to use up a lot of stuff from the pantry and freezer in order to save some money.  Plus, they are both getting over stuffed to the point that it's difficult to find what I need.

Here's a look at what I have planned for the next couple of weeks:

The Santa Fe Spaghetti Squash is a meatless recipe that I've been wanting to try ever since I saw it posted over at Debbi Does Dinner...Healthy and Low Calorie.  For some reason, I never seem to get to it each week.  I really need to make this soon!

I've seen the recipe for Tuna Corn Chowder in one of my cookbooks but never wanted to try it because of the HOT TUNA thing.  But since I've tackled my "fear" last week with the tuna noodle casserole, I thought this would be another great recipe to try to use up some of that tuna we have in the pantry!

I made Easy Peasy Pasta a couple of weeks ago and promised to post the recipe.  Don't worry, I haven't forgotten.  I'll be sharing this recipe and many more in the next couple of weeks!

Need some dinner inspiration?  Don't forget to check out more menus over at Menu Plan Monday.
⌘ Posted by Alison on Monday, September 27, 2010