Here I am a day late for Menu Plan Monday....again.  I just can't seem to get my act together after a busy weekend to get my menu plan ready and posted.  I'm wondering if I need to start planning monthly instead of weekly.

Last week, although I posted a plan, it didn't get followed.  Joe went wild boar hunting last weekend.  Grace and I spent the weekend shopping and going out to dinner with Grace's Aunt Barb.  It was a fun, but exhausting weekend.  Grace and I just aren't used to the much activity after being stuck in the house for this long and cold winter!  It took all of us most of the week to recover.  So, the last thing I wanted to do was cook last week.  We only followed a few of the meals from last week's plan:  the Black Bean and Sweet Potato Burritos, the leftover night and the birthday party!   :)  See, no cooking!  I did make grilled cheese sandwiches for dinner one night and thawed out some homemade chicken noodle soup...after that, the rest of the week is a blur!

We were busy again this past weekend.  Our nieces came over to hang out and play with Grace for a few hours.  They played in the yard for most of the day.  Pushing Grace in the swing or pulling her in the wagon.  When Joe got home, we made a trip to Toys R Us to get a birthday gift for our niece's 2nd birthday.  We don't go to the toy store often, so I was really excited to see Grace's reaction to seeing so many toys in one place.  Well, she was so tired from playing with her cousins that she was so mellow through the entire store!  The only thing she really had much of an opinion on was a hula hoop!

On Sunday, we went to our nieces 2nd birthday party!  Grace had so much fun running around with the other kids!  She napped in the car on the ride there and when we pulled up to her Grandmom's house, she spotted the bounce house peeking over the fence right away!  She couldn't get through the house to the back yard fast enough!

Just before we left the party, she discovered the trampoline further back in the yard and really had a lot of fun jumping on that too!  So now, I'm having trouble deciding what to get Grace for her birthday!  I had a few different ideas in mind and a trampoline wasn't one of them....until the other day!

Yesterday was errand day, since Joe was off from work.  It was such a rainy and dreary day and we all really just wanted to stay home and relax, but we were up and out first thing in the morning and back in time for naptime.  We all took a nap during Grace's naptime yesterday.  Even Remmy!

When naptime was over, I made dinner.  I made all of Grace's favorites: chicken, noodles, peas and corn.  After a week of not cooking, I think we all really enjoyed having a home cooked meal! 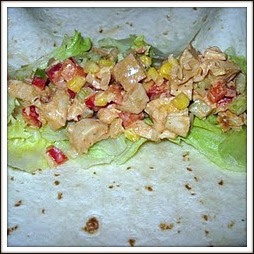 So, that's my cooking plan for the week.  I need to start thinking about Grace's birthday...she'll turn two in just about 6 weeks!!!  I also want to start some spring cleaning and purging of clutter.  After Grace's birthday, I want to have a yard sale and get rid of some stuff around the house that we don't use.  My basement is starting to look like something out of the show Hoarders.  I really need to get control of the mess and just start getting rid of stuff that we don't need or want.  It's so hard sometimes though....I just know I'll NEED an item as soon as I get rid of it!
⌘ Posted by Alison on Tuesday, March 22, 2011

I am sooo excited for the pizza party!!!

The BBQ wraps look really good! Have fun at your pizza party! Can't wait to hear about it. Enjoy the enchiladas too. I still have a pan in the freezer that I can't wait to dig into!

Those wraps look really good! I'm really impressed with the wild boar hunting, though. I've heard wild hogs are vicious. Can't wait to see what you do for the impending 2yr old's party. Thanks for sharing.