Pasta and Bean Soup with Sausage

I love Pinterest.  It's one of my favorite ways to spend time when I should be doing other things.  You know, things like cleaning the bathroom or doing the laundry!  It's a place where I go to day dream about how I'd decorate my house if only it were bigger.  Where I get craft ideas for when I have unlimited time and money on my hands.  But it's also a great resource for new recipes.  While I may not have the money for all the great home remodeling ideas and craft ideas I see on Pinterest, I certainly can afford to try a few new recipes here and there.  I mean, we have to eat, right?

Sometime last year, (according to Pinterest, it was 40 weeks ago) I pinned this recipe for a very yummy looking soup.  At the time, I had some sausage in the fridge that needed to be cooked.  So, like most recipes I try, I ended up changing things around a bit.  We were so pleased with the results, that I didn't take the time to take a picture of the soup.  Which is why I didn't post the recipe until now, 40 weeks later.

While the original recipe is much easier to make, I like the addition of the sausage and vegetables.  I prepped the veggies earlier in the week, so it was really easy when it came time to throwing the soup together. 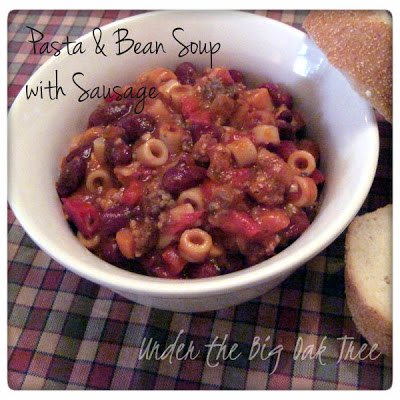 Pasta and Bean Soup with Sausage


We enjoyed this soup with a nice crusty loaf of Italian Bread.  Joe topped his with some shredded cheese.

This soup is so tasty and filling and very easy to make.  I can assure you I won't be waiting another 40 weeks to serve this again!

I really like that it has beans. Good source of protein. With the cold weather about to hit, sounds like a good Sunday night dinner. Thanks for sharing.

That looks delicious! My current diet won't let me eat noodles or beans, so I'll live vicariously through recipes. By the way I'm a new follower! Come visit me at http://www.weidknecht.com!

I love Pinterest too! That soup looks absolutely delicious!! YUM!

That looks delicious! I'll have to try it out.