Our Dry Sink ~ From Changing Table to Coffee Station

When I was pregnant with Grace, I wasn't sure if I wanted a changing table or not.  I remember my mom telling me that I fell of mine when I was a baby.  Yes, that's probably what's wrong with me now.  Anyway, I just really didn't think we'd want or need one.  I figured the changing pad on the sofa or bed would do fine.

Then one day, we were at the thrift shop and Joe saw a gorgeous dry sink and commented how he thought that would make a great changing table.  I stopped dead in my tracks because many months earlier, I had said the same thing about a different dry sink in a different second hand shop!

Either way, I still wasn't certain that I liked the idea of a changing table...but any time Joe shows any interest in vintage furniture, I jump at the chance before he changes his mind!  Sadly, that particular piece had a sold sign stuck to it.

Then one morning while Joe was working on the nursery, I was looking for a vintage dresser for the nursery. That's when I saw an Ethan Allen dry sink listed for $100.  That was a bit out of our price range since we still needed to furnish the rest of her room.  I called the number in the listing and explained to voicemail that we were putting together the nursery on a tight budget and that we planned to use it as a changing table for our baby girl, would she take less than $100.

I wasn't even expecting a call back.  But, call back she did!  She asked what price I was thinking.  Joe told me to ask if she'd take $50, figuring she'd make the counter offer of $75.  Rather than offer $75 only to be counter offered at $85.  Well, I was super-shocked when she took our offer of $50!  Especially, since she had just listed it that morning!  Turns out, she used it as a changing table for her two sons!  We picked it up that day!

Sadly, I don't have a photo of it in use as a changing table.  All of our pictures from when Grace was an infant are trapped in our other computer that is no longer working...I really need to get that looked at and see if we can save those pics!

But, after she was too big for the changing table, we moved it into our kitchen and used it for additional storage.  You can see it in the background of the photo below. 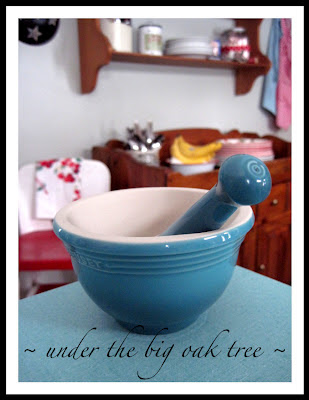 I've also used it in my dining room as a buffet or side table, but our dining room is so tiny that it didn't really work in there.  So, it's back in the kitchen again.  I love the way it looks in the photo above, holding dinner plates, a crock of silverware and an enamel bowl filled with napkins.  But it does tend to get cluttered up with mail, coupons, or toys that Grace decides to leave there.  So, it doesn't look as pretty as often as I like.

Last month, with a new appliance added to the kitchen in the form of a Keurig Vue brewer and very little counter space, I needed to find a spot for the machine where it would be easily accessible, but not in the way while I try prepare meals.

I thought of the dry sink, but really didn't like the way it looked with the sunken top.  I asked Joe if he could build a frame with a top to raise it up.  We didn't want to spend any money on this project, so Joe checked to see what he had in the garage and shed. He found what he needed, took a few measurements and got right to work! 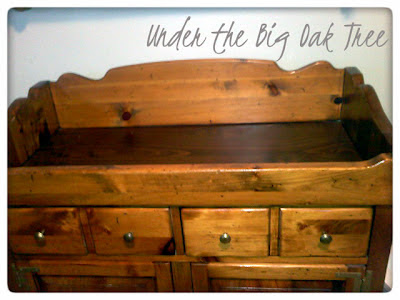 In this photo, you can see that Joe just built a frame using some scrap wood he had in the garage.  After building the frame, he just placed it inside the sunken top. 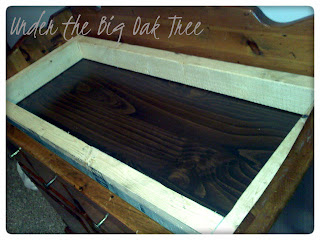 Joe also had a scrap piece of shelving or something that was almost the perfect size for the new top for our dry sink.  He only had to cut an inch or two off of it.  That was just placed right on top of the frame. It's completely temporary, but still sturdy enough to hold our new Keurig Vue!

I love that we worked with what we had and found a solution and new home for our brewer.  In the past, I would have suggested we go out and buy something new (or at least new to us) to use.  But with a few adjustments and a little time, Joe was able to make something we already owned, just a bit more useful than it was before.  In recent months, we've definitely making do with what we have rather than spending money on something new.

Eventually, I want to redo the entire dry sink.  You know, a coat of paint and some new hardware.  I'm just having trouble deciding.  I'm thinking we may have to repaint the kitchen first...then choose a color for the dry sink!

Check back later in the week to see it all decked out for our Keurig Vue House Party!

Email ThisBlogThis!Share to TwitterShare to FacebookShare to Pinterest
Labels: around the house, DIY, home, Home Repairs

OHHHH I hope you don't paint it. In many cases adding paint to that beautiful wood will take the value down, plus it will take away from it's beauty. You could always remove the finish and add new finish to it. New hardware would be great, keep a look out on ebay or craigslist. I have seen some great vintage looking hardware at Restoration hardware also.