You may have noticed that I skipped menu planning last week.  I've been struggling with menu planning (among other things) lately.  It's been really hot and I just haven't been in the mood to cook.

I'm working on getting Grace onto a new schedule.  I need to manage our time better throughout the day.  She's older and more active, so she's spending less time in her play pen.  That makes it more difficult for me to get anything done around the house.  It also makes it more difficult for me to find computer time.  We don't have a laptop and our computer is in the spare bedroom.  Even though, we have a small house, I don't like Grace running around while I'm in a different room.  We're pretty much baby-proofed, but still, anything could happen, so she's never really out of my sight for more than a minute.

Part of working on our new schedule, is getting Grace out of our bed and into her own room.  She did great sleeping in her co-sleeper next to our bed when she was an infant.  She outgrew it and Joe wasn't ready for her to be out of our room.  We made the mistake of letting her in our bed and for about 7  months now, I haven't had a decent night's sleep.  For a week now, she's been sleeping in her pack and play in our room.  Once it's cool enough (we don't have central air), I'll start getting her into her crib in her room.  Fingers crossed that this all goes well.  I seriously need some sleep.

As of right now, sleeping isn't going well.  Grace has been up since 2:30 am.  I didn't get to bed until after 1:00 am.  Today is going to be a long day.  I pray for an early nap.  I'll be joining her.  I have her set up in her play pen in the living room.  Barney is on the TV.  Not one of her favorites, but it should keep her occupied for a bit.  It's just too early (4:30) for her to be running around the house.  Okay, maybe not too early for her, but it's too early for mommy to be chasing her around the house.

I re-joined Weight Watchers Online last week.  Since then, most of my free time (the little I get) has been spent getting familiar with the plan, journaling my food and figuring out my points.

Hopefully, I'll be able to get into the swing of things and get cooking again. When I do, I'll be sharing some new, healthy recipes as I try them out.

I'll be doing my "weigh in" in a few hours.  I'm not expecting a big loss (if any) since I was a bit over my points this weekend.  More on that later today in my weightloss post. 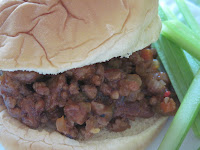 For now, here is my menu plan for the week: 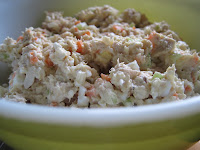 These four meals will give me a lot of leftovers.  If I decide to freeze the leftovers, then I'll fill in the rest of the week with breakfast for dinner, crunchy tuna salad,  OR maybe a new recipe or two.  We'll see how the week goes.

I'll be linking this post to Menu Plan Monday hosted by I'm an Organizing Junkie.
⌘ Posted by Alison on Monday, August 09, 2010

I'd give you advice on moving the babe out, but I'm a failure. We never co-slept (or co-roomed) when they were little, but when diabetes rolled around, I'd sometimes be so nervous at night that I'd sleep with her just to keep an eye on her. Four years later and we have a daybed in our room just for the kids to crash on. In the past week, Monkey and Sparkle have each slept there twice. *sigh* Someday...

Good luck at the weigh in!