Last week, I showed you our small veggie garden.  Tiny, huh?  Well, like I said in that post, it's a trial run for us first time gardeners.

In addition to the trial garden, I've also been on the look out for different ideas for using vegetables.

If next year's garden is bigger and better like we have planned, I don't want us to get sick of looking at (let alone eating) another squash, zucchini, tomato, etc.

So, I figure looking now and having a plan might be a good idea!  :)

GetHealthyCheap.com is one of my favorite places to check out new recipe ideas!  For me, though, recipe blogs tend to be like my cookbooks that live in a closet in my basement.  I flip though the pages and never get around to trying the recipe.  I have good intentions, but I guess I'm easily distracted, too!  The "I want to try this" recipes are often forgotten!

Sooo not the case with Julie's Baked Summer Squash Fritters!   Once I saw that recipe, I just KNEW I had to make them!  Especially since I just picked one zucchini and one summer squash from our trial garden!

I followed the original recipe almost all the way through without making any changes but at the last minute, I made a couple of adjustments.  But that's just the way I am!  Again, good intentions and all!  :) 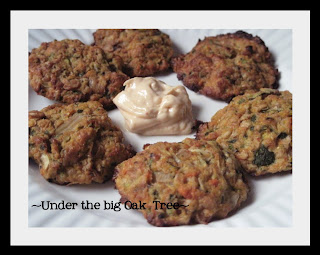 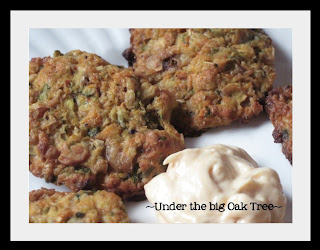 Method:
Notes:
These veggie fritters were amazing!  I thought for sure that this recipe was going to be something that Joe wouldn't go for at all.  But he fooled me!  I was in the middle of making the rest of dinner when the timer went off on the oven.  Joe was just walking in the door from work at the very same moment, so I handed him the oven mitt and asked him to remove the cookie sheet.

He took them from the oven and ate one immediately!  I'm surprised he didn't burn his mouth!  He ate several before we even sat down to dinner!

This recipe is definitely a keeper!  I'll be making them again very soon!

Since this is Julie's recipe (just slightly adapted), I thought it more than fitting that I link this to her weekly blog party, Family Food Fridays!

I'll also be sharing this recipe at the following blog carnivals:

Ooohhh these look yummy! Especially since I am a nut case for zucchinis and summer squash. I've been finding so many recipes and this one looks just so healthy too! Thanks for sharing!

I am your new follower from Relax and Surf. Come visit me at http://showmemama.blogspot.com

This is terrific. I am working on not making fried food and I have not had much luck with patties. I have to try these and see what happens. Thanks for linking this gem to My Meatless Mondays.

those look yummy! feel free to link them up at my MMMmonday recipe linky too! http://www.actingbalanced.com/2010/08/mmmmonday-review-recipe-and-linky.html

I want to welcome you to My Sweet and Savory and thank you for linking this wonderful recipe up for My Meatless Mondays.

I was reading your menu, for this week, and it seems you are making headway in meatless cooking. I do eat meat, sometimes, but I really like the meatless meals.

Looking forward to getting to know you better.

Yea! I'm so glad you like the fritters and got to use your vintage shredder! My husband surprised me too when he liked them so much. Thanks for the link love!

I need to try this recipe! My kids don't care of squash, but you never know when it's disguised!

these look fantastic..a girlfriend of mine returned from her summer vacation in croatia and couldn't stop telling me about these delicate delicious zucchini fritters they were served...i have been trying to duplicate the recipe for her for weeks. this will have to go into the mix...fingers crossed it resembles what she remembers. thank you for joining TNSC and linking up this recipe

Thanks for sharing. I will have to try this. Have a great day/

These sound really good! Thanks for the recipe!
suchakingdom.blogspot.com

I like that these are baked, not fried. Yummy way to use up veggies. Thanks for sharing! =)

What a fabulous way to use up the abundance of summer squash laying around here right now. Gorgeous! Thanks so much for sharing with t4t this week =)

Hi Allie and welcome to the two for tuesday recipe blog hop! So glad you could join us because that means I get to check out your lovely site! I am now following you and grabbed your rss feed. These fritters look amazing and I just had some Bujhia the other day (indian veggie fritters) that reminded me of these, though these are baked and thus so much easier! Thanks again for linking and I hope to see you regularly on the hop! Alex@amoderatelife

Alison, this is a very interesting dish! The Chipotle Mayo sounds like it would pull everything together nicely. Thank you for sharing with us at Monday Mania!

Yummy! I love veggie fritters. Thanks for linking this to Two for Tuesdays!

I saw that recipe on Gethealthycheap, and it sure looked nice. Thanks for stopping by Two for Tuesday.

These look good! Great way to eat healthy and use some of the seasonal veggies!

Those look great. I love using zucchini. Thanks for participating in Gluten-Free Wednesdays.

Hey Alison! Just came back by to say thanks for linking these up today! Have a great weekend. :)

I bet if you added lentils or beans you could eat these as veggie burgers too. But I love the fritter idea. I've been needing a recipe like this for awhile actually. Thanks so much for linking with me today!