Wow!  I felt like last week was such a busy week, although, at the same time, I feel like I didn't get much accomplished.

I worked on Grace's schedule a bit last week, and feel as if we're on the right track.  Months ago, I was able to get Grace to sleep in her pack and play just outside of our room.  Just recently, she's been refusing to sleep in the pack and play and has been wanting to sleep with me.  It's been rough.

Thursday night, I tried her in her crib.  It took several times of me laying her back down but she eventually fell asleep.  She woke up screaming and wanting out at 3:00 am.  But I just put her back down until she gave up. Friday night, same deal.  Many tries, but she got the point.  She also woke in the night wanting out, but I didn't give in.  Saturday was much easier.  She fussed initially, but after laying her back down, she snuggled up and fell asleep.  She woke up, whined, found her binky and fell back to sleep on her own!

Last night, she DID NOT fuss at all when I put her down and she DID NOT wake up wanting out in the middle of the night!  (Yay!)  The busy day at the pumpkin patch may have had something to do with that!

I managed to clean up a bit this week.  I tidied the main points of the house: kitchen, living room and bathroom.  The basement and bedrooms are still a wreck.  The entire house still needs a good cleaning, but I'm satistifed that I accomplished just that much last week! 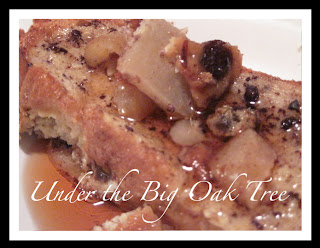 First, I made French Toast Casserole using this recipe that I found on Allrecipes.com.  I switched some of the measurements around a bit, but not enough to repost the recipe.  Mainly, I just halved the recipe since it was just the two of us eating it.  I couldn't find my vanilla extract so I left it out.  I added some slivered almonds and a bit of maple syrup to the apple/raisin mixture.  I really like that about this recipe.  It's so easy to switch a few ingredients here and there to adapt to your tastes or what's in your pantry! 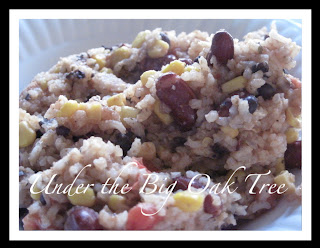 For the second recipe, I strayed from my menu plan.  I just had to!  I've been wanting to make rice and beans for a couple of weeks and just never get around to it.  After seeing Lisa's post for her Santa-fe Style Rice and Beans, I just had to make it!  I stuck to the recipe as much as I could, only making a few small changes.  I used frozen black beans that I had prepared from dry beans a few weeks ago instead of the canned black beans.  I added 1/2 a can of fire roasted diced tomatoes with some liquid, mainly because they sounded really tasty as I was checking the pantry for the rest of the ingredients I needed for this recipe.  I left out the cheese and sour cream.  I didn't do a very good job of reading the recipe and assumed that they were toppings and not mix-ins.  I topped mine with a bit of taco cheese, Joe topped his with the cheese and sour cream.  I really loved this recipe and I'm very pleased that we have leftovers to include in this week's menu plan.

I also made a chicken dish last week(I'll share it later this week).  It was not on the menu plan either.  Joe bought some split chicken breast on sale for 10 lbs. for $10.  I didn't have any room in the freezer, so I cooked it all to use in recipes this week.

With Halloween being this weekend, I'm not sure what we'll be doing.  I don't want to plan too much.  But I'm sure we'll have plenty of leftovers to choose from if we're home!

As always, I'm linking my menu plan over at Menu Plan Monday!
⌘ Posted by Alison on Monday, October 25, 2010