Wordless Wednesday ~ A Picture A Day: My 365 Project

This year, I decided to start a 365 Photo Project. I've seen this done as a way for a person to see their improvement in photography through an entire year. I'm not ever going to be a good photographer. I just point and shoot...that's good enough for me. Instead, I want to see the gradual change in Grace through the year.

This past year, I haven't taken as many pictures as I could have of Grace. Either she was still in pajamas or her hair or face was messy. Don't get me wrong, I took pictures of her on days like that. I just mostly grabbed the camera for posed shots or when she was being extra silly.

So, this year, I want to capture everything. Even if it's just a picture of her with crusty boogies on her nose! (Yes, the other day, I thought I had a great photo of her, only to upload the picture later to notice that her nose was dirty!)

Here's one of my favorite pictures from this past week (messy hair and all!): 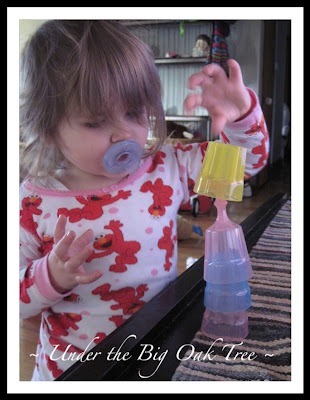 I'm linking this post to the following blog carnivals:

Your daughter is a cutie. In this photo, for some reason, she looks like an artist in the making. I can hear her say, "voila, my masterpiece!"

What a cutie! Love them first thing in the morning, all messy haired and in their jammies! I did the same thing of my youngest to my fb page. I posted it anyway though because I just loved her eyes in it!

Good luck on your p365 journey. No easy feat! And happy WW!

Have you seen the video of the man who took a photo of his daughter for 10 years or so? It's on youtube - very cool.

What a cutie! Great capture!

I think that's a great idea! You can never have enough photo's of your little ones. I know it sounds so cliche but they DO grow up so fast! My baby is 8, almost 9! I can't believe it! Another thing, write everything down. They will LOVE to hear about the goofy things they do when they are this year, trust me. :-)

My parents are professional photographers, and I'm a point and shoot kind of girl. My folks do mostly wildlife and landscape. My people pictures (boogie nose and all) are aleays more interesting than theirs because I take pictures of people being happy and doing stuff they love. Good photography is not all about technical stuff. Just get the picture!