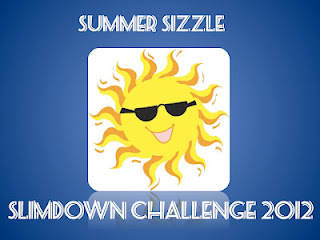 Last week, while I stayed within my calorie-limit most of the time, I found myself skipping breakfast, loading up on snacks for lunch instead of the healthier meal options I chose the previous week, and drinking less water.  A lot less water.

The main problem with this is the fact that in the beginning of the week, I was skipping water but not replacing it with anything.  I was going through my day with just one glass of water a day.  Not good.  In the middle of the week, I was drinking my calories.  I had a couple glasses of juice but was careful to measure it out and count the calories.  Because of this, I still knew I getting enough fluids each day.  I was getting headaches, was tired and getting cranky.  By the end of the week, I was getting much better with drinking more water but never made it past 6 glasses when my goal is 8 glasses.  Still, it was a big improvement of where I was in the beginning of the week.

On the days that I felt that I was going crazy with the snacking, I was careful to still measure and weigh my snacks and track the calories.  By doing this, I realized that I didn't do as badly as I originally thought and stayed pretty close to my calorie limit even on the days that I went over.

I was able to find satisfaction in the fact that in the past, I wouldn't have thought twice about eating a big chunk of cake for dessert, then an hour later dishing out 1/3 carton of ice cream.  But this week, a big splurge was a mini cupcake from the supermarket bakery, topped with 1/2 cup vanilla bean ice cream.  Still not the best choice for a snack, but I was pleased with myself for choosing the smaller portions and being satisfied with that.

Another issue I've had is that during the day, I seem to budget my calories well.  In fact, I find that in fear of running out of calories too early in the day, I've been stingy in my caloric intake during the day.  After dinner, I find myself with 500 or more calories left for the day that I feel compelled to use before bedtime.  I need to work on spacing my calories out better so that I don't end up pigging out on snacks before bed.

Soda.  I had my first soda on Saturday at the food court in the mall.  Along with a burger and fries.  Knowing we were heading to the mall, I skipped breakfast to allow for a food-court lunch and boy did I enjoy it!  I don't even regret it or feel guilty about it one bit!  My only issue with the lunch was the soda was root beer instead of my preferred Diet Pepsi, but McDonald's doesn't carry Pepsi products and I'm not a fan of Diet Coke.  Otherwise, Mmm Mmm Mmmmm!  No regrets!  (Of course, at the time of typing this, I haven't yet weighed in for the week!)

I had one day where I didn't track calories at all but I was aware of each and every thing that I ate, I made good choices and only put small portions of dinner on my plate.  The only problem I had that day was later that night when I snacked.  I was feeling very emotional and didn't care much about dieting or anything else at the moment.  I didn't weigh my popcorn or measure out the fruit punch before I sat down to watch TV.  I wasn't too hard on myself because I know I could have done SO MUCH WORSE.  And after I sat down the next morning and thought about what I ate the day before, I realized that I was probably pretty close (if not under) my daily calorie target.

Exercise was a problem this week.  Grace is starting to get to the point that she naps less.  I think she napped twice this week.  On those days, I found myself preparing dinner, working on blog posts or making a rare but much needed phone-call to my mom or grandmom.  Sure, I get it, I'll lose the weight much quicker with the help of exercise, but convincing myself to actually do it is going to be a challenge in itself.

Sleep was another problem this week.  I just didn't get enough of it!  Stress (with the help of Netflix) kept me up until the wee hours of the morning many nights this past week. 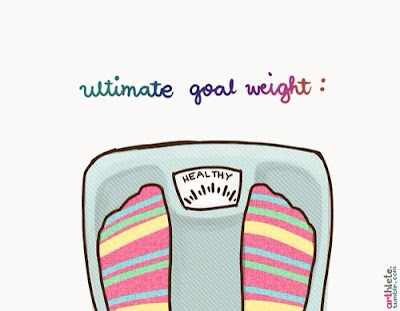 I am pleased to report another loss this week!  Woohoo!  Although I know that I could have made better choices for myself this past week, I am very happy with my 1.6 lb loss!  Which brings me to a total of 5.2 lbs. lost so far!  Happy Dance!

I announced my results to Joe and he and Grace gave me a big cheer!

Even though my total loss isn't a huge amount of weight, I can see a difference when I look in the mirror.  My face, neck and upper body don't seem to be as bloated as they were before the challenge started.  Although, I took measurements at the challenge start, I decided that getting out the tape measure each week isn't a good idea for my obsessive and addictive personality.  So, instead I'm just going to go by what I see in the mirror and how much better my clothes (will eventually) fit.

And...guess what!!!  I just got a small work-out in!  Grace saw that I had the balance board out for the Wii Fit from when I weighed myself.  She went over and dug out the yoga mat and her "balance board" and asked that we exercise.  Even though I didn't have breakfast yet and was really hungry, I gave in and agreed to a small work-out.  We jogged the short course, we played a couple of balance games and did two strength training exercises.  Not much, but it's a start!

After putting our balance boards away, I made myself a smoothie to sip while I sit here and finish up this post.


As Week 3 begins, I really want to focus on these issues for myself:

Last week, I gave my blog a face lift and made some changes to the tabs at the top of the page.  I started to update the Weight Loss 2012 tab that was pretty much neglected since January.  I also added a tab for recipes that include calorie counts.  Since I'm counting calories when I cook and eat, I'll be including calorie counts as I post most new recipes.  The tab at the top will make it easy to find them in one spot!

Also, I try post daily updates on my facebook page.  Just quick little blurbs here and there about how my day is going...usually diet related!  So, check it out if you'd like to follow along each day!

Also, if you are also using My Fitness Pal, my profile name there is fitmomma613.  Add me as your friend!

Okay, that's about it for me this morning.  I've got dinner in the crock pot, but aside from that, not much else has gotten done around here.  I'd better get my butt moving!

First of all - Congrats on the loss! You are moving in the right direction!! You have really great goals set for this week. I was wondering if planning your meals a day in advance so you knew what the caloric count was for each meal would help with balancing calories throughout the day so you aren't left with a bulk in the later part of your day. Just a thought.

You're doing great hun.
I know it's not easy but if it was we'd all have done it by now and be at our dream size/weight.
Remember you don't have to be perfect to be better.

@Rochelle, I used to do that years ago when I was on Weight Watchers. I would plan out the following day and sure enough when I woke up, I didn't want a single thing that I planned! This went on for months of trying!

This week, I'm working ahead in cooking and figuring the calories and portion sizes for new recipes. So, hopefully that will help a little.

Thanks for the reminder!

@Kia, Thank you! I've been trying very hard to not be so hard on myself. Old habits are hard to break. Baby steps!

Thanks for the encouragement, ladies! Have a great week!!!!

Planning ahead is the only way to do it. I've been told, because.... well I'm still learning. I also find that, if I haven't eaten my calories for the day by 7 in the evening, I refuse to eat after that because it'll all turn to fat when I go to bed but lots of time there's a good 500 calories or more left and that's not good either. So both of us have to plan better. This week for me planning won't happen. I'm leaving from Wyoming to send time with my son at college and I know we'll be hiking and climbing the mountains but I also know that he hasn't had a decent meal for ages so we will be eating out and lots of it. I'll try and be careful but I know very well that scale (if I hadn't but it away for the summer) would be screaming.
You will do great. I know you will. Just plan and track and relax and don't fret. It'll happen. One day at a time it will happen.
Take care and have a blessed Sunday!

Hi!Congratulations on your 5+ pound loss. You may not be doing everything as perfectly as you would like to see, but you are seeing results, so keep up the good work!

P.S. I live in the country too, and love it.

I think you're doing really well! You seem very focused and committed, keep it up! Sorry about your sleep but what are you watching on Netflix? I watch stuff early in the morning and at night and am always looking for recommendations.

Find some "weights" for Grace, plastic play ones and you and she can do strength training together. :-)

what excellent goals. I hope that this week is leading you to success in all of them! Your loss is so awesome! I love to see hard work paying off.

Congrats on the 5 lbs! Keep it up!

I just started back up with Weight Watchers...and had a horrible second week! So I totally get what you are saying about bad second weeks. I guess the key is to not let it discourage you and start the next week fresh.