When I was a kid I really hated breakfast.  Mostly, it was eggs that I disliked.  Especially, when my dad added cheese to the omelets.  Oh!  The smell!  The combination of the cooked eggs and the melted sharp cheddar cheese...the smell alone had me feeling queasy for hours!

Dad would make me some plain scrambled eggs and I would have to drown them in ketchup to cover the taste!

In my early teens, I would hear my dad getting breakfast ready while listening to Breakfast with the Beatles.  I started to pretend to sleep-in on those mornings, hoping he would forget to make something for me.  Sometimes it worked, sometimes it didn't.

The only time I enjoyed breakfast as a kid is when my dad would cook bacon, fried potatoes and scrambled eggs all mixed together.  The bacon and potato flavors were strong enough to mask the flavor of those dreaded eggs!  If only my dad could have made that every weekend, it would have saved us some ketchup! Not to mention, I could have spent less time hiding in my room on Sunday mornings.

Over the years, I've made this several times.  Canned, sliced potatoes work great, but I find it's easier to use leftover Grilled Potatoes to make this dish!

One morning, I found myself with a half pound of pre-cooked bacon and leftover Grilled Potatoes in the fridge and knew right away that I was going to make this one-frying pan breakfast! 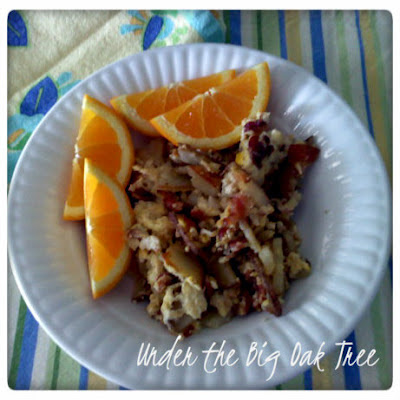