My baby, the TV Junkie

Grace is a TV junkie.  She was barely a few weeks old when she started to notice the TV.

It started with America's Next Top Model.  Everytime she heard Tyra's voice, she'd turn to try to see the TV.

I blame myself.  I watched WAY too much TV while I was pregnant with her.   And ANTM was is my biggest guilty pleasure!

Soon after noticing that she was drawn to the television, we started keeping kids' shows on for background noise during the day.  Grace likes anything with lots of music, singing and dancing!

She seemed to like Yo Gabba Gabba the most and it's still one of her favorites!  (My favorite is the episode with Jack Black!)

Once she was able to pull herself to her feet, she would crawl over to the TV and stand in front of it.  It's to the point that if we have company, I have to turn off the television or else she will ignore anyone that is visiting.

Since she's been walking, it's gotten a little better.  She'll run around the house, stop and watch a minute or two of TV, then run and grab a toy, then right back at the TV.  And it doesn't matter if it's one of her shows or something that we prefer to watch, she'll be right there in front of the TV. 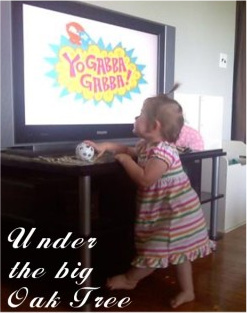 I have a lot of pictures of her in that spot.  She's not going to be a happy camper when Joe hangs the TV above the fireplace!  I'm hoping he'll do it before Christmas so we have room for the Christmas tree!
⌘ Posted by Alison on Saturday, July 24, 2010

My son was the same way. As an infant, he would twist his neck around to see the tv. Commercials were his favorite, followed closely by That 70's Show. To this day, he still loves television.

It's crazy how kids gravitate toward different things. My daughter was 2 before she even really noticed the tv.

Yo Gabba Gabba is dangerous. I can't watch that at all. Some of my daycare kids totally love that show. I used to watch wayyyyyy too much TV too so I get it. My kids are a product of what I used to be too.