On Sunday, Joe and I took Grace out for some Frugal Summer Fun.

Oh, it was frugal!

And it was summer!

The word in question right now is FUN!


We live near a park that has a wonderful, old carousel that is only open a few Sundays out of the year.

A couple of weekends ago, I checked to see when they would have the carousel open so we could take Grace for her first ride on the merry-go-round.

I was so happy to see that they were open last Sunday and we didn't have any plans.  We called Grace's aunt and uncle to see if they would meet us there.  I had her dressed in a pretty, red dress and had her hair up in pig tails, hoping to get a perfect picture of her on the carousel horse. 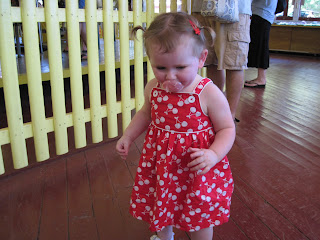 When we arrived, we found out that the next park over (they are joined by a walking bridge) was hosting the town's community day.

Grace was too young for the activities going on at the community day, but seemed to enjoy being outside and watching all the people and listening to the band that was playing at one of the nearby booths.

As long as we didn't sit still for too long, she was fine!  Grace likes to keep moving when she's in her stroller!

All of the prices at the community day were really reasonable.  It looked as if the activities for the kids were either free or they were taking a small donation.  They had lots of booths selling fair-type foods.  I settled for a big tray of fries.  (Only $2)  They were yummy and I really enjoyed them since I only managed to eat a yogurt  just before we walked out of the house and it was well-past lunch time!

After we all grabbed something to eat, we decided to walk over to the other park to put Grace on the carousel.

To get to the carousel, we had to walk up a huge mountain hill.  You can read more about that here.

Grace wasn't thrilled about the hill.   Her daddy and uncle carried the stroller with her in it to the top.  And she was a little more than cranky by the time I got up there. 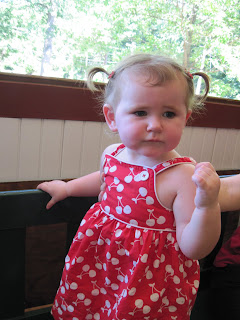 The guys found some seats and bought some drinks while her aunt and I took her inside the building that houses the carousel and let her watch the horses go round and round.  She seemed to be pretty interested.

I ran over to buy some tickets.  They were 3 for $1.00 so I bought 9 tickets thinking that we could all ride 3 times.  (I'm pretty sure the proceeds go to the maintenance of the ride.) 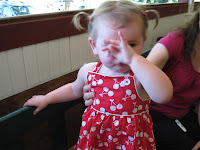 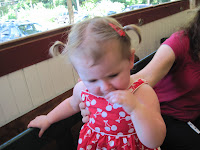 The line was already too long to get on the very next run, so we let Grace watch the horses again before it was our turn.

Finally, the ride stopped and it was our turn.  We grabbed 2 horses next to each other.  I climbed on and put Grace on my lap.  She wasn't thrilled.  The carousel started to move and she hated it!  She screamed and squirmed the entire ride!  She managed to kick off her shoes and lose both of the rubberbands that were holding her pigtails! 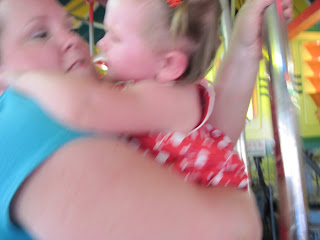 When the carousel finally stopped, we gathered up the stuff Grace dropped (shoes, pacifier) and went to sit with the guys.  Grace was still fussing and squirming, so I took her outside the building.  She could still see the carousel through the open windows, but wasn't as worried that I'd force her to ride it again!

After she calmed down, we went back inside.   There were a few tables with postcards and other souvenirs.  I bought Grace a little plush stick horse (made us all think of Jose Jalapeno...on a stick!) that she just loves to wave around like a baton!

Grace was calm and I took her over to see her daddy and we were visited by our nephews and their friends.  We tried to give them our extra tickets but they didn't want them.  The tickets would be good for the rest of the summer, but chances are Grace won't like the carousel before the summer is over.  So, we left the tickets on the table hoping that the next family to sit there would be able to use them.

We finished up our drinks and decided to leave.  We tried to find another way to get to our car so we could avoid that mountain hill, but that would have taken us really out of our way, so we had one of our nephews carry the diaper bag down the hill while Joe carried Grace and I pushed the empty stroller.

When we got to the truck, I was emptying my pockets and realized that we really didn't spend that much  money.  $2 for the fries, $3 for the carousel tickets, $3 for the bottles of water and $2 for the stick horse.  (We could have spent less if we took our own drinks, but I already had Grace's bag with us and that was pretty heavy.)

A total of $10 for a summer afternoon activity for the three of us.  Not bad.  It may not have turned out as wonderful as I would have hoped with the cranky baby, but we will definitely keep our local towns' community days in mind for next summer!

Your daughter is just adorable, and that's not really such an odd first reaction, but it makes a great story.

Its A Blog Party said...

Such a frugal day!
Thanks for linking up!
~Liz