Save your veggie scraps and make vegetable broth

I originally shared this tutorial with my readers on my other blog, My Vintage Kitchen.

With so many of us tending our vegetable gardens these days, I felt that it was worth it to re-post it here as a reminder to save all your vegetable scraps to make easy, homemade veggie broth.

After you strain the veggies from the broth, you can then add them to your compost bin and get every last bit of use out of those scraps!

Except for the carnival links at the bottom, I've just copied and pasted this post in it's original form.


I've said before that my Crock-Pot is one of my most-used appliances in my kitchen.  Only to be beat by my constantly running dishwasher!
After making my own chicken broth (I'll post about that soon...I promise) last month, I decided to find out if vegetable broth can be made in the Crock-Pot.  Sure enough, it can!  Yay!

Searching the Internet, I found a lot of information for making homemade vegetable broth.  Rachael wrote this post for Buffalo Frugal Living Examiner and it seemed to have the best information for me.  After reading her post and seeing how simple it was to make veggie broth, I wanted to jump right in and make it that very second.  But, it wouldn't have been a very good vegetable broth, since I didn't have any veggie scraps saved.

I decided to share my  vegetable broth making experience with you and was even prepared with the camera close by  and took step by step photos of the entire process! 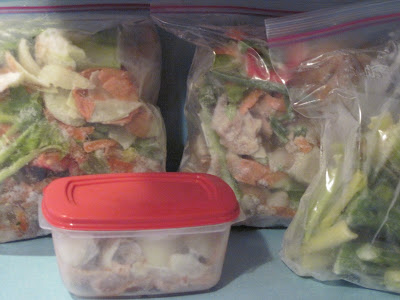 I stored the scraps in gallon size Ziplock Freezer Bags in my basement freezer. 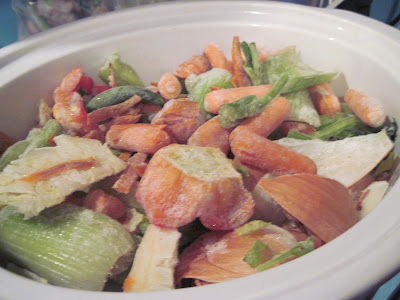 I poured the frozen** scraps into my Crock-Pot.  My oval Crock-Pot only needed one of the gallon-sized bags to fill it.  This particular bag was full of scraps from carrots, peppers, celery, cabbage and onions.

**Remember:  if you are using cold or frozen vegetable scraps, to start off with a room temperature Crock-Pot.  If it's pre-heated, it may crack when the cold items are added. 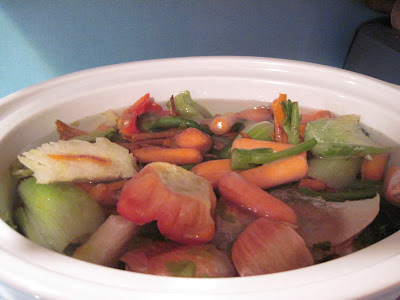 I added COLD water to about 1/2 inch from the top.  Then I covered it and cooked on LOW for about 13 hours. 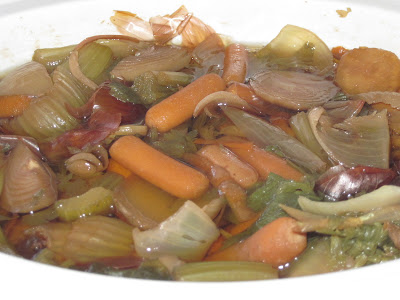 After letting it simmer through the night, this is what it looked like in the morning.  I took the lid off and let it cool for about half an hour. 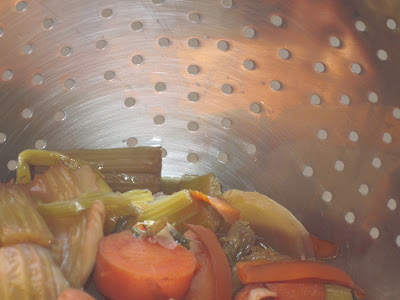 I placed  a large bowl in my sink and then placed my colander inside of the bowl to strain the veggies from the broth. 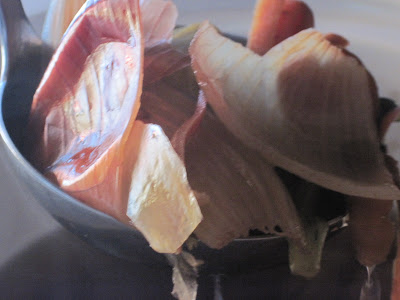 I used a large ladle to scoop out most of the veggies and broth and let it strain through the colander and into the bowl until there was enough removed so that I could pour it through the strainer without making much of a mess! 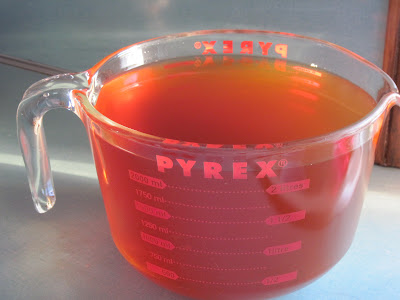 After that, I just had to pour it into my large measuring cup to see just how much broth was made!  It's past the 8 cup line!  So, that's about 4 cans of broth.  Four less cans I have to buy not only means that I saved money, but four less cans to throw away recycle.

My next step will be to pour it into Ziplock Freezer Bags when it's finished cooling.  I'll store them in 2 cup portions and freeze flat on the shelf of my kitchen freezer.  Once they are solid, they will stack nicely in my basement freezer!

I will be sharing this blog post with the following blog carnivals this week:
⌘ Posted by Alison on Thursday, July 29, 2010

What a great idea! I've made chicken broth with leftover chicken, but it never occurred to me to save all my veggie scraps until I had enough to do this.

the cape on the corner said...

i love my crockpot, and it's a totally basic one that i inherited from my stepmom. one day i will get one that is programmable and stainless looking.

thanks so much for stopping by the cape on the corner and for your comment love! this will be my first time using vinyl...you'll have to let us know when you eventually do, too!

I have thought about this MANY times. Here's my problem though. I don't USE that much chicken broth. I don't make a lot of soups and I often just use a small amount of chicken broth (I usually just put in a bouillion cube). I still might do this though. Thanks!!

We always have so many as we are vegetarians.

Have a good weekend!

Thanks so much for stoppin' by for a Latte'. I am happy to return the follow. I bet you could can your chicken stock. :)

Wow!Something so simple, but I would never have thought of it and so much better than buying stock.

Great idea! Using a crock pot makes it seem so much easier. I'm definitely going to start doing this!

Great idea and reminder! Thanks for sharing! :)

Thanks for the directions! I love using my crockpot, but would never have thought to use it to make brooth. I will have to start saving my scraps! Visiting from Wednesday Window.
~Kimberlee
www.TheSpunkyDiva.blogspot.com

What a fantastic idea! I'll definitely be using it, as growing season is about to start in my neck of the woods.